Keeping Us Funky Down Low 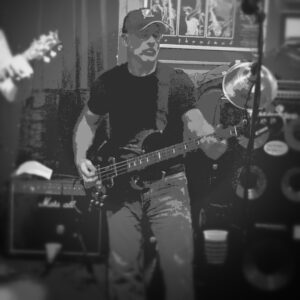 Originally born and raised in East Lansing Michigan (home of the Michigan State Spartans), Greg always loved music.  As a young child, Greg’s mother had an 8-track tape player with tapes from foundational artists like The Beatles, Three Dog Night, America, Bread, Herb Alpert & the Tijuana Brass, and many others.  His parents had pool parties on weekends and the music was alway blasting.  At weddings or parties, if there was music and a dance floor, Greg was on it.  Thank God there was no FaceBook Live or mobile phone video cameras back then.

Greg moved to Florida at the age of 18 to attend college since Florida was a whole lot warmer than Michigan. After receiving an Associate’s Degree at Tallahassee Community College, Greg enrolled in the University of South Florida in Tampa where he earned a Bachelor’s Degree in Finance.

While in college in Tallahassee, Greg struck gold.  He became friends with several people who would launch his future as a bass guitar and guitar player.  One of his best friends in college was a Tallahassee local named Clint who was not only an incredible guitar player, but was likely the best guitar player that Greg has ever personally known. It was Clint that encouraged Greg to buy his first guitar in 1984 (a Yamaha acoustic classical) and then his first bass guitar (a Fender Musicmaster which he still has to this day).  Through Clint, Greg met Clint’s band-mate and guitar/bass player Jeff.  Before long, the three played a rock/jazz/fusion trio gig at a huge dinner banquet for the president of Florida State University.

In another stroke of fate while in Tallahassee, Greg coincidentally rented an apartment next door to another incredible guitar and bass guitar player, Rick. Within weeks, Rick and Greg were roommates and the epic jam sessions were on. Rick was a pro who played bass with an FSU jazz band and he had toured around the Southeast as the lead guitar player for a well-known Elvis tribute band. After college, the two continued to record and play for many years, including a few years in a band with some other friends called the “Soul Practitioners”. Greg then took a long sabbatical from live performance and focused mostly on home recording at his home studio in Tampa Bay and at Clint or Rick’s professional home studios (both in Orlando).

Sadly, in October 2002, Greg’s friend Clint was killed in a automobile accident while he was driving home to Orlando after visiting his mother in Tallahassee.  Greg’s life as a musician was delt an emotional death-blow.  It took quite some time for Greg to get back in the saddle and start playing again.  Greg’s friend Rick was instrumental in getting a guitar back in Greg’s hands.

In 2010-2011, Greg was recruited to play bass guitar in a worship band for a church in Tampa. In 2015 was asked to be the backup bass player for Tampa Bay rock cover band Oysterbone Band, where he has filled in as needed at venues and private parties, including the band’s Fall 2021 performance at the Celebrate Oldsmar Festival at RE Olds Park on Tampa Bay.

In 2021, Greg got a phone call from his friend Tony, the bass player for Oysterbone. Tony’s friend Matt (a singer who had occasionally sang some tunes on stage with Tony’s band) was putting a band together with friends Larry and Nick and they needed a bass player.

The band was taking shape. Greg had some unused band names ready and his marketing company PositiveMedia got to work on a marketing and web development plan. Shortly thereafter…