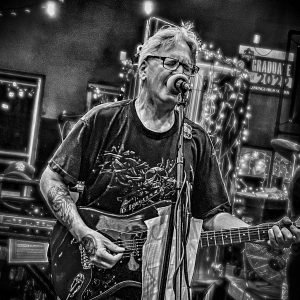 Larry was born in the winter of 1967 in the Catskill Mountains of upstate New York. Larry’s first recollection of musical exposure was the Bobby Gentry song “Ode To Billy Joe”. He wasn’t  even 1-year-old, but he vividly remembers hearing that song fill the air.

Larry’s mom always had the radio playing in the kitchen of their house on Long Island. A friend of hers was engaged to a DJ named Doug Keck who worked at a radio station on Long Island, WGBB 1240 A.M. Larry remembers listening with his mom to see if they could hear Doug talking between the songs.

It was in this time period 1969 to 1975 that Larry’s musical path began. Besides hearing “Ode To Billy Joe” (Bobby Gentry) in 1967, Larry was also exposed to “Space Oddity” (David Bowie 1969), “The Guitar Man” (Bread 1972) which had that awesome ‘Wah’ effect playing on the guitar throughout the song “Brandy” (The Looking Glass 1972), “Dancing In The Moonlight” (King Harvest (1973), “My Maria” (B.W. Stevenson 1973), “Midnight Train To Georgia” (Gladys Knight and The Pips 1973), “Please Come To Boston” (Dave Loggins 1974) which had that cool ‘Phaser’ effect on the guitar, and “Wildfire” (Michael Martin Murphy 1975) which Larry still loves and plays to this day. All of these songs are songs that tell a story, and as he had come to find out, played an intricate part in the way he writes his songs. Larry loves a good story. There were many other bands and musicians involved in shaping Larry’s musical foundation, but these were the cornerstones.

Larry got his first acoustic guitar when he was 10, but I didn’t really start to get anywhere with it until he was 12. His dad got it for him and he knew a guy who gave guitar lessons just two streets away.  It was with this teacher where Larry learned to play and understand music. The guitar teacher exposed Larry to even more music like The Who, The Rolling Stones, Led Zeppelin and everyone’s favorite The Beatles. Larry learned songs by all these bands, expanding his musical skills, writing skills, and overall musical knowledge.

Once Larry got hang of the guitar, he started buying and listening to records all the time (yes, old school vinyl). He began figuring songs out on his own and eventually started writing his own music. For Larry’s 15th birthday he received a Tascam 4-track tape recorder and started recording songs. Larry still records at home to this day and writes constantly. He gives guitar lessons everyday to some terrific kids and tries to pass on as much as he can so people can enjoy music as much as he does and express themselves in a unique way.

Larry has found it is important to keep things moving in life and to always move forward. He could not imagine what his life would be like if music was not a part of it. A good song can make your day, which is very powerful when you think about it. How many times have you been having a bad day and then you hear that great song that just turns the whole day around?

Larry loves that and wants to be a part of it.